Jón Sigurðsson, a clever nineteenth-century politician, is the unifying hero of independent Iceland.

Iceland was the property of various Scandinavian kings for 700 years, until a political movement for independence was born in the 19th century.

The idea of nationalism swept through Europe at the time and inspired a group of Icelandic students in Copenhagen to define the case of Iceland: the nation spoke its own language, lived within a territory marked by clear boarders and was once a free state.

Denmark was not as eager for a divorce, and many wondered if Iceland’s poor and undeveloped economy would thrive without support.

Along came Jón Sigurðsson with a legal argument against the continuation of Iceland’s loyalty to the Kingdom of Denmark. 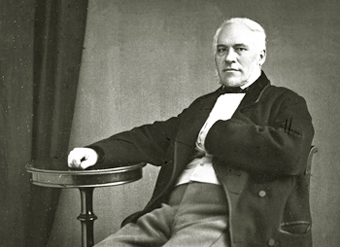 Freedom fighters before him had based their argument on romantic nationalism. They wanted to restore the Alþingi parliament at the original Þingvellir site, while the pragmatic Jón was firm on Reykjavík as its location. He cared to win arguments, not hearts and sentiment.

Independence took generations, as each milestone was slowly achieved: a constitution in 1874, home rule in 1904, sovereignty status in 1918, a republic in 1944. The largest achievement yet would be to bring the idea to life. The next movement would be to mobilize the population and build a political class.

The 1944 birth of a Republic marked the final victory after the country voted for complete independence. Voter turnout was 98.4 percent overall, reaching 100 percent in two districts. Only 377 people, a fractional percentage, voted in favor of remaining in the Danish kingdom.

Copenhagen, where the movement began, was Iceland’s capital no more.

The Hrafnseyri farm has a museum honoring the Westfjord legend

To mark this milestone, the birthday of Jón on 17 June became Iceland’s National Day and his former home at Hrafnseyri, Westfjords, a salute to his memory. Every town celebrates 17th of June parades and flags, and outside parliament (in Reykjavík!) the bronze statue of Jón towers over a cheering crowd every year.

Easter in Iceland - a great time to visit