The eruption in Eyjafjallajökull volcano in 2010 drew a lot of attention to Iceland by stopping air traffic over Europe for several days.

The 2010 Eyjafjallajökull and Fimmvörðuháls eruptions

The infamous Eyjafjallajökull central volcano is located on the south coast of Iceland. It drew attention to Iceland when it woke from nearly 200 years of sleep with two connected eruptions in 2010. The precursors were a few seismic swarm episodes originating beneath the volcano, occurring in May 1994, July 1999 and May 2009. The swarms lasted for about a month each, and they were thought to be from magma injections into the roots of the volcano. Then, in late December 2009, the volcano showed signs of unrest yet again. The volcano also started inflating, and crustal deformation was detected at an accelerated speed towards the days before the eruption.

The twin craters Magni and Móði created in the Fimmvörðuháls 2010 eruption.

The former outbreak in Eyjafjallajökull in 2010 was a small effusive basalt eruption starting on March 20th when a 400 m long fissure opened on the northeastern flank of the volcano called Fimmvörðuháls that lies between the ice caps of Eyjafjallajökull and Mýrdalsjökull glaciers at 800 m above sea level. The eruption soon concentrated in two craters, which were given the names Magni and Móði after the sons of Thor, the god of thunder from the Norse mythology. When the eruption stopped on April 12th, 2010, it had produced 0.026 km3 of basalt lava and tephra and is classified as a small eruption.

The Fimmvörðuháls 2010 eruption was called "a typical tourist eruption".

People flocked to see the eruption, even though it was quite a challenging hike to the spot. Some took the easier way in a super jeep ride or got the birds-eye view from an airplane or a helicopter. The event was often referred to as "a typical tourist eruption," a term used in Icelandic - in some levity perhaps, to identify eruptions that can be relatively easily accessed by the public and are reasonably safe to approach due to their behavior and location.

The eruption site lies on the popular but challenging hiking path, also named Fimmvörðuháls, that lies between Skógar and Þórsmörk and connects with the famous Laugavegur hiking trail. It still welcomes backpackers with a close-up view of the stunning scoria craters and lava formations. 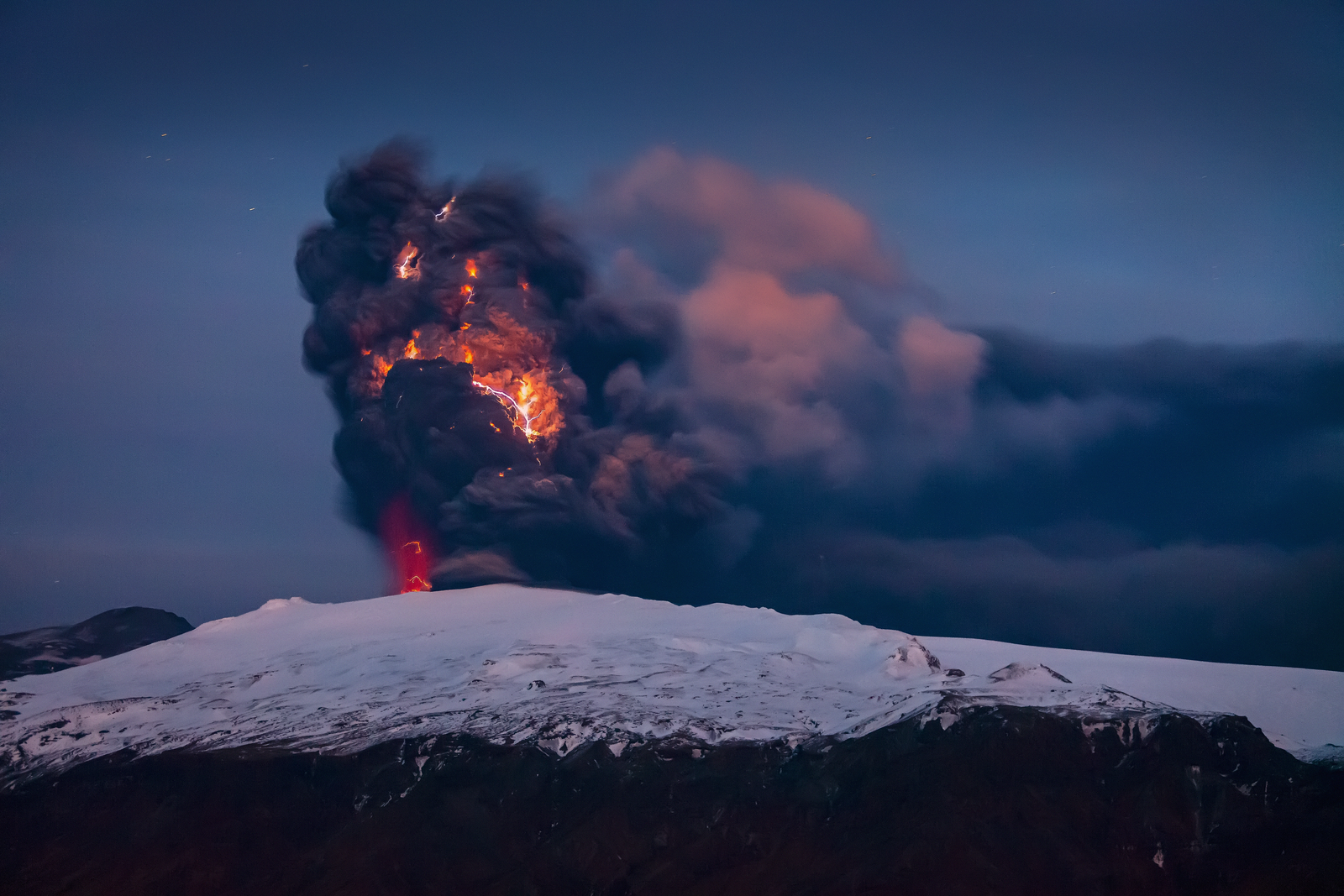 The eruption in Eyjafjallajökull in 2010 melted the 250 m thick ice cap on the volcano and the water flushed down the slopes.

The second eruption began only two days later, on April 14th, 2010, and lasted for 71 days. This time it was an explosive eruption in the ice-covered summit crater of Eyjafjallajökull, with much more severe consequences than the Fimmvörðuháls event, fortunately without casualties though.

Shortly after the eruption began, the meltwater from the glacier cascaded down the mountain's slopes in a jökulhlaup and burst out in Gígjukvísl river onto the Markarfljót river, cutting off the Ring Road for several days.

The interplay between the andesitic magma and the 250 m thick glacial ice on top of the volcano produced fine ash that northerly winds blew over the North-Atlantic Ocean and Europe. In total, about 100.000 flights were canceled, and 2 million people were affected. 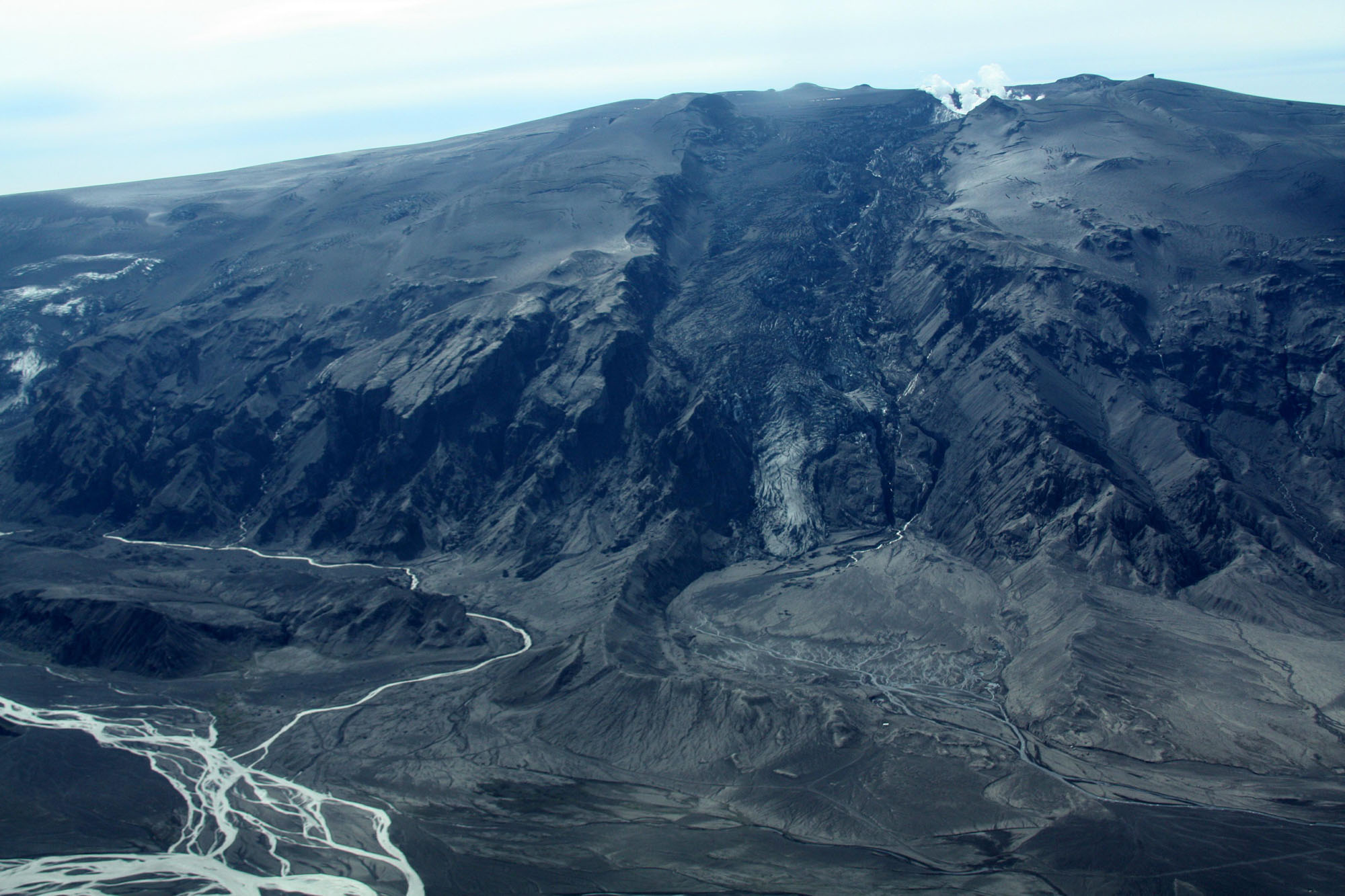 The Eyjafjallajökull volcano and the farmlands in the neighborhood were completely covered with black ash after the eruption.

The farmer's community at the foot of the volcano was greatly affected and suffered from the direct impact of a heavy ashfall. Although, due to the fortunate timing of the event in early spring, the land recovered in a few weeks. Life turned slowly back to normal in the Eyjafjöll region after the eruption stopped on June 23rd, 2010.

This event was sure no "tourist eruption" while it was ongoing. Still, to a great surprise, the events in Eyjafjallajökull 2010 raised such interest to visit Iceland that tourism multiplied in the following years. It turned out that people were eager to see the stunning landscapes in Iceland shown in the global media in connection with the eruption.

How to pronounce the impossible name of the notorious Eyjafjallajökull volcano?

The name of the volcano is a typical descriptive landmark name in Icelandic and literally means "the glacier of the island mountains". It is quite a mouthful to pronounce and the Icelandic language is perhaps not the easiest one. If you know phonetics you can try this:

To practice, you can also listen to the sweet ukulele Eyjafjallajökull song made by the Icelandic musician Eliza Newman.